Tech at the Table

Posted on September 3, 2015 by Tolrendordm

Prep time for sessions is always at a premium. Even right now, when I’m on sabbatical leave from work, it seems to take a big chunk of elapsed time to get myself ready for a new session. Of course, this could be due to the fact that I’m trying to make progress on 3 campaigns at the moment, but regardless, I’m always looking for tricks that make prep smoother and quicker.

One of my current campaigns has remote players, so we’ve been using www.roll20.net for this. For my two ‘home’ campaigns, I thought this might be a valuable tool even for face-to-face gaming … so I tried it out…

The first attempt was in the 4E (with a 13th Age riff) solo campaign that I’m running for my son. Only two of us I thought, so why not use roll20.net as our game board, to save me the work of printing out maps/tokens, mounting maps etc. I used my laptop (behind the DM screen of course…) for DM control, and my iPad ‘air-played’ to the TV for player control.

Did this work? Well, technically it worked fine, except for a few annoying instances where the AirPlay just dropped out. The monsters were easy to control from the DM’s laptop, and the lag (internet round-trip to roll20 and back) was pretty short. From a gaming perspective however my son was less than impressed. Basically, as I’ve mentioned before, he likes the physical props of the game, and the lack of a real map and tokens just didn’t work for him. He tends to pore over the map, looking at tactical options etc, and didn’t feel the ‘connection’ with the TV screen or iPad!

A bit of a disappointment to me, as it certainly had been a dream to prep solely in the digital domain! I also very much like the ‘fog-of-war’ functionality, where you can reveal rooms one-by-one as the party enter them. For example in the Amber Tower campaign, the party is currently running through Thunderspire Labyrinth, attacking the Duergar stronghold of Horned Hold. The whole complex is a lot larger than the areas where encounters take place, so printing and mounting a full map seemed out of the question, and in any case would lead to all sorts of issues with ‘covering up’ areas that had not yet been explored. Clearly however, I needed to provide a physical combat map!

As a second experiment, I went for a hybrid approach, as shown on the right. I 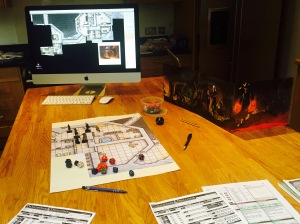 used a large screen computer at our normal gaming table to display a players’ view of roll20.net. This allowed me to control the entire dungeon map from my laptop, revealing areas as the party moved around, and was also great in being able to show images and handouts on screen (such as the view of the Horned Hold at the bottom right). When the party ran into some Duergar however, I brought out onto the table a printed scale map for the smaller area, and we ran with figures and tokens as normal. This approach worked really well, and was approved by the kids! We’ve used it successfully for two sessions, and it looks like becoming a regular style.

What it doesn’t solve of course, is the need for me to produce physical ‘assets’ for each game session. I’m not sure what the solution for this is, at least until gaming tables become affordable large flat horizontal touch screens with figure recognition 😉 The tech for this clearly exists, but probably not yet at consumer prices!

This entry was posted in RPG Tech Talk, RPG Technology. Bookmark the permalink.

1 Response to Tech at the Table