It’s a while since I participated in a Carnival, but this looked like a fun topic! Creating a new campaign is one of the most exciting things you can take on as a GM. All those ideas, all that potential: in some ways the very unformed nature of the campaign is the attraction; the real nitty-gritty of preparation, when you actually have to make choices as to what is in or out, suddenly becomes a little more like work 🙂

As it happens, despite the fact that I am actively running a D&D 4E campaign for my kids , I have been toying with a secondary D&D Next campaign. This has recently moved into the actual planning and preparation stage, and I’m hoping to run the first session in a couple of weeks. So for my Carnival entry I’m going to outline the thought process and preparation stages I’ve just been going through:

All campaigns have to start somewhere: with a concept! I’m not talking necessarily about anything earth-shattering; this simply means a few questions need to be answered, such as:

In this case, I had some key goals, so this was easy to establish:

Very few of my campaigns get off the ground without a map! Invariably I find that creating a map of the campaign area gets my creative juices flowing, and lots of ideas stem from that. That much should be obvious from this blog 🙂

In this particular case however, the Havenscoast is one of the regions of my world that is 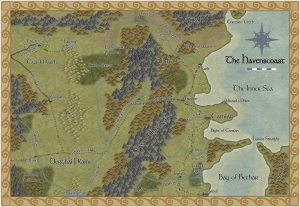 already the most extensively mapped, not only recently with some of the maps I’ve posted on the blog, but also with a large number of my original 19080s hand-drawn hex maps. The bulk of this campaign will take place in the north-east region of the map, around Knight’s Keep and the Tower of Watch. I’m sure there’ll be more work to do here, but I’m off to a good start!

Ok, so now I know a bit about what I’m going to run, and where, but it needs a lot of fleshing out before I can start to prep sessions in earnest! As I’ve recently discussed, I’ve

been making heavy use of mind-mapping tools recently to help with this stage of the process. At this point, nothing is in or out, its just a matter of getting as many ideas jotted down as possible. Some of these may never be used, or may be picked up on later in the campaign, but they’re all useful!

This document is a living document which continue to be updated throughout the life of the campaign; I am not the sort of GM who can come up with a 20-30 level story arc in advance! The adventures of the characters will shape how my ideas for the campaign develop, even if I have some narrative underpinning it all.

This is where the process starts to become less about random ideas, and more about actual preparation i.e. I begin to actually write material for the campaign. It’s easy to get bogged down here, which can be fun of course, and a lot of GMs, myself included, love to detail rich histories and setting locations etc., but bear in mind that the more time you spend in this phase, the longer it will take to get to actually playing! Wolfgang Baur of Kobold Press made a great point in one of his essays on world-building (paraphrased): history is of no use to a campaign unless it impacts the adventurers’ current lives!

For this campaign, I’ve already written a short history of the Havenscoast, and an overview of the key locales. As the intention is that the characters are members (or at least associates) of the Knights of Watch, I need to put together some more detailed notes on this organisation, and hopefully some cool backgrounds and feats (in DnD Next parlance) that the players can use to add some setting flavour to their PCs.

Armed with all the above, it’s time to turn my attention to the specific prep needed to get ready for the opening session or adventure of the campaign. I’ve been posting about this process a lot lately (e.g. here and here), so won’t go into it again. The goal is to really get a campaign off the ground with a bang, so the players immediately begin to invest in the setting, story and characters, so I try not to skimp on the preparation here!

So there you have it, lots of (fun) work done, and lots still to go … but very soon a brand new Tolrendor campaign will be born … and for a DM, there are not too many more satisfying feelings! 🙂