This is my (late) entry for the February Annual in my own challenge, in which I attempt to create a meaningful map for Tolrendor using the Cartographer’s Annual issue for the month. I have to say, after taking this on, Profantasy didn’t exactly help me out, with the first two issues of the year being quite different from the normal fare!

February’s issue was a style for drawing isometric building views. This is not something I’ve ever attempted before, so it took me quite a long time to decide on my subject for this month. Eventually I settled on mapping a small way-fort in the Havenscoast, used by a mercenary company called the Blue Riders, who specialise in escorting caravans along the Traders’ Way. So here it is: 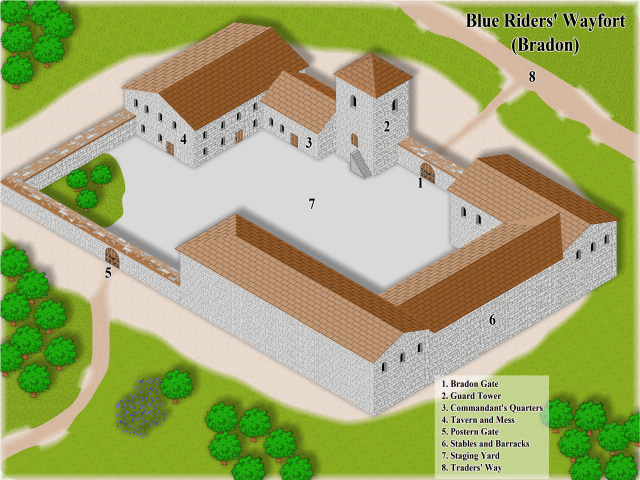 I’ll be honest, I can’t see this being a style I’ll use too often! I found it pretty fiddly to get it looking right, for example having to move bits of building back and forth to get them in the right order. Also, the need to have separate symbols for each angle meant that you’re pretty much limited to whatever is included in the style.

However, it’s always good to try something new – you don’t learn otherwise! Now I just need to get cracking on March’s issue, and see if I can catch up on the Challenge!

This entry was posted in Area Map B4: The Havenscoast, Cartography, Columns, The Annual Challenge, The Havenscoast Project, Tolrendor Gazetter. Bookmark the permalink.