DM for Kids: Back in the Saddle (literally…)

In my last DM for Kids column I lamented the fact that scheduling D&D sessions was not happening nearly as frequently  as I’d like! However, my intention was to rectify that over the Christmas holidays …. and I’m very happy to say that we succeeded!

We had two great sessions: finishing off a short adventure called Den of Dreus (from Dragon Magazine 179, somewhat modified) in the first, and some down-time (with complications…) back in Fallcrest in the second.

The final encounter in the adventure had the party eagerly leaving the dungeon with the evil wizardess a captive, and the magical tome they had been sent to retrieve safely in their possession – only to realise a small force of skeletons was lying in wait outside, lead by a tiefling necromancer, who was also intent on taking possession of the tome!! Battlemap (drawn with Campaign Catographer’s Dungeon Designer add-on) below:

Surprisingly, the kids were more interested in escaping than fighting, and tried to sneak to their horses and ride away. Obviously however, their captive saw her opportunity, and just happened to trip and fall with a scream, thus alerting the skeletons, who closed in to attack!

A bit miffed that their plan had been foiled, the kids still had their characters leap into 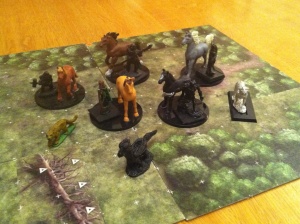 their saddles, and what followed was a memorable combat – the first time they’d actually had the opportunity to fight on horseback! In actual fact, their plan was still to ride away with the prize, but a couple of judicious Grasp of the Earthen Grave spells from the necromancer took care of that!

At this point, the kids discovered that if they had to fight, doing so on horseback was actually a lot of fun … and destructive … resulting in the skeletons being quickly dispatched. The necromancer saw the way things were going and fled the field … only to re-surface back in Fallcrest a couple of days later …

We’d missed gaming a lot, so it was great to get ‘back in that saddle’ as well. The challenge now of course is to ensure that we get D&D properly back on the family schedule for 2013!! To help with this, I’ve been making changes to the way I do my prep … more on this next time!

This entry was posted in 4E D&D, Cartography, Columns, DM for Kids, Encounters, Roleplaying with Kids, The Amber Tower Campaign. Bookmark the permalink.