The fourth part of my review series heads westwards into (very) strange magic-afflicted lands, and then north to the remnants of the great elven empire. Once again, prepare for the marvellous and the unexpected along the ride!  You can find the rest of the series here, here and here!

Ok, so this chapter is definitely strange, with a capital S! The Wasted West is a region blighted  by an ancient arcane war of unimaginable power, ostensibly against the 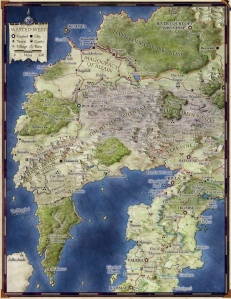 ‘imperialism’ of the elves, but carried on between city-states after their retreat from the world with hugely destructive consequences. The outcome is a wide region blighted by ancient ‘Old One’ monstrosities from another world, drifting across a desert landscape in a magical ‘slumber’, with a few battered remnants of the once powerful wizard-ruled cities and realms scattered around the edges.

For my tastes, this is all possibly a bit too much on the weird side. There are heavy overtones of Cthulhu, 4E’s Far Realm, and even a post-holocaust vibe. In Wolfgang’s own terminology (from his newly published Kobold Guide to Worldbuilding, an offshoot of the Midgard project), this is definitely towards the ‘wild-eyed wahoo” style of fantasy.

However, please don’t let my (I’m typically a low/medium fantasy guy) impressions put you off here – there are some fantastic ideas in this chapter. The pick of them for me has to be the White Knights of Bourgund – where every knight is backed by a mage bonded to his/her armour, and able to cast spells remotely through it on telepathic command. How cool is that! As is often the case in Midgard however, nothing is quite as it seems – the bonded wizards are effectively enslaved and spend their lives in a tower ‘serving their knights – a situation ripe with the seeds of resentment and betrayal 🙂

Elsewhere in this region, we have ancient mages, barely human after centuries of manipulating the ley lines that pollute the area, and calling forth dark powers; haunted giants, sentient (and hungry) jungles; a city of potion makers in a swamp; ‘Old One’ worshipping goblins, and much more! I’ve actually read this chapter front-to-back several times now, and despite my initial thoughts, it’s really growing on me!

There is also quite a lot of rules content in this chapter: magic effects and arcane storms in the Wastes; the Armour Bonded Mage archetype (from the White Knights section), a fantastic table of potions side-effects; ghostly encounters, and rounded out by an ancient spellbook, which includes a number of new spells with the flavour of ancient decayed magic.

Chapter 8: Domains of the Princes 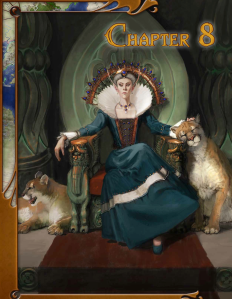 After the weird but wondrous Wasted West, there seemed a slight danger that this chapter would appear a bit humdrum. After all, this region is the remnants of the ancient elven empire, and that’s a topic that’s been covered in numerous settings, right?

Not so in Midgard! For a start, the ‘remnants’ of the empire are still ruled by an elf (The Beloved Imperatrix), and she’s been on the throne a long time … so long that virtually all of the major nobility are related to her in some way. As she gets older and older, the political implications of this grow larger – and this atmosphere is well portrayed in the book. Most of the key figures of the Imperial Court are described, along with their relationships and political allegiances.

Secondly, almost exclusively, the major houses of the realm still have access to the fey roads, magical pathways through the shadow realm that can be used to travel across the empire much faster (and more safely…?) than by traditional means. An interesting section covers the origins of these roads, as well as providing an incantation for their use. The Imperatrix uses these roads to control the realm, including moving her court between the three main cities (the Great Procession) every three years.

The chapter continues with a description of the major cities and baronies. I love the Germanic ‘Holy Roman Empire’ feel to this region, both in the names (Hirschberg, Bad Solitz, Salzbach etc…) and in the vast variety of holdings, noble houses and titles. There is a great section on granting a barony to your player characters, and the possible complications and adventures that this might bring to your high level party 🙂

Finally, the chapter covers the great forests that were once the heart of the elven empire: one of which is still inhabited by ‘exiles’ i.e. elves that did not leave the lands when their kin retreated from the world many centuries ago; and the other totally abandoned and now essentially a dangerous hunting ground for ancient treasures and magics. One thing I like about this whole concept is that Midgard’s elves are very much not the ‘Tolkienesque’ elves typical in D&D, but are rather much more ambiguous – indeed they are the fey of European mythology – alien, complex, and perilous – adventurers beware!

To the Far North …

Our journey draws to an end, with only two chapters still to cover. But if you would continue along the way, pack your fur cloak, and your sword, because we must take ship now, headed for the cold and unforgiving Northlands…