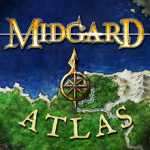 This post almost made it as my Tech Talk column of the month, or my Map of the Month … but in the end it stands on it’s own 🙂

The Midgard Campaign Setting is the upcoming product from Open Design (now Kobold Press) that brings the whole world of Zobeck to your gaming table! I admit to a certain amount of bias, as I’m a backer of this project, and have been (via Kickstarter) for a number of recent Open Design/Midgard projects, but I can’t think of any game design company at the moment that has as much verve and momentum as the ‘small but fierce’ kobolds lead by Wolfgang Baur!

Even so, it was a surprise to see them coming out with an iPad app! The Midgard Atlas is a simple little app that brings the splendour of Jonathan Roberts cartography to your tablet – along with clickable icons of some major cities that bring up a zoomable city map, and even some drifting clouds 🙂 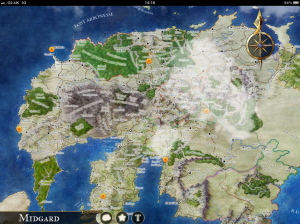 All in all, its a neat little app. There is no background information, so its little more than a gimmick from an actual play perspective, and some people might find the $3.99 price a bit steep on that score (only compared to the content of other apps on the store – I certainly don’t think its an unreasonable price), but it’s a cool little gimmick, and worthy of the kobolds!

It will be interesting to see how (and if) this develops once the campaign setting is out!

This entry was posted in Cartography, RPG Technology. Bookmark the permalink.